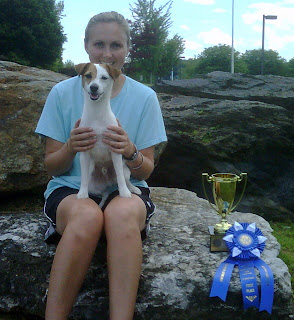 Well the boys and I have been busy since our last post. The spring trialing season is coming to an end and we will be taking a break from showing. We have had an awesome spring. Dasher is closing in on his ADCh with only needing one more super Q in Snooker and 2 standard legs. Zippy has been getting some nice top points in Gamblers and Jumpers and he is plugging away at his MAD, only needing 2 more standard legs. They have also each earned another DAM team Q which is always nice. Both Zip and Dasher have qualified in all three tournament classes (GP, Steeplechase and DAM Team) for the USDAA Nationals in Arizona this fall. Needless to say both boys will be making the trip to AZ this year. I think we are opting to drive out instead of fly. Since Jeannette and I are showing multiple dogs we feel more comfortable driving than trying to fly the dogs in cargo.

Our spring show season ended with the North East Regional competition in Bethlehem, PA. Except for one fairly severe thunderstorm on Saturday, we really lucked out with the weather. Partly sunny skies and not too hot for this time of year. Both boys did really great all weekend, each earning 2 DAM team Q’s and having some really nice runs. Zippy had earned a bye into the 2nd round of the Grand Prix through a previous win at a local show a few months back. I went into round 2 not really thinking about winning or not winning, just wanting to do our best. Well I think Zippy had ideas of his own!! As soon as I released him from the start line he took off like a rocket, I was merely a passenger!! Forget doing any of the front crosses I had walked, I was sprinting just to get my rear crosses in! He nailed his weave pole entrance (something we have been having issues with) and just kept trucking!! There were obviously lots of amazing dog and handler teams in our class so even after Zip’s stellar run it didn’t occur to me that we had a chance at winning. It wasn’t until later in the class that I checked his time that I realized we were sitting in 1st place. With only a few dogs to go I held my breath. Turns out it was Zippy’s day to shine!! I was so proud of him, he has only been showing a little over a year so needless to say he has blown me away with his ability. Jeannette also had a great weekend with her dogs so we celebrated the only way we know how….Dairy Queen!! 🙂

Unfortunately I had to scratch both boys from round 1 of Steeplechase. After the thunderstorm the ground got really torn up and sloppy as it continued to drizzle. Our group was the very last to go and by that time dogs and handlers were slipping and sliding. I didn’t want to risk injuring the dogs so we opted to scratch the class. Jeannette put a bug in my ear that we may have to hit the Chicago regional in August, it is inside on artificial turn….hmmm may be a possibility.

All three boys celebrated today by playing most of the day in the yard and swimming in the kiddie pool.